Numerous amounts of research support the fact that it is critical to teach a child how to think spatially. Spatial thinking has been positively correlated with success in math and science [Mohan & Mohan 2013].

A map can be explored in many ways. At the Center, we decided to start small with our students and then expand. We focused on a neighborhood to a city to a state to a country to a continent, and ending with the entire globe. Along the way we described the map features at different scales, talked about the purpose of a map, used a map scale to measure distance between places, and discussed cardinal directions.

Our children have some background knowledge of what a map is. When asked where his home was, Tianyi pointed to a major coastal city in China on the globe. Other children found their home by locating their streets on the Brookline map.

They made many interesting comments such as, “You live closer to Devotion school and yet why do you go to Lawrence? I live along the buffer zone. I didn’t know how far Runkle school was from all of the other schools.”

During the next two weeks, we examined many different Brookline and nearby maps drawn at different scales. We talked about how mapmakers or cartographers shrink the actual size into a small piece of paper and how can we tell the distance from one point to the other point by looking at the map. The process wasn’t an easy or familiar concept for most of the children.

Along the way, we showed the kids how to expand or shrink geometrical shapes proportionally using grid paper and how to draw a map of the classroom to scale. The understanding of scale directly relates to the distance on the map and how we use this information to calculate actual distance between places on the map. 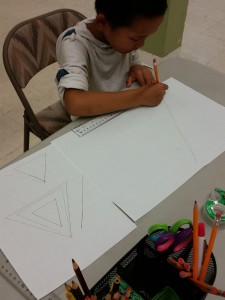 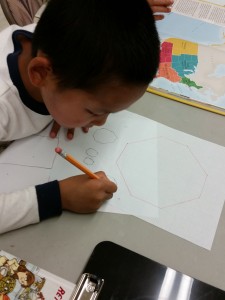 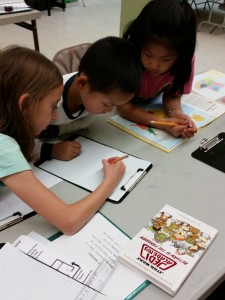 One of the most important lessons we covered was when we had the children think about how we find Brookline Town Hall for our Center’s evacuation procedure. This involved locating our classroom within the Korean Church, and in turn, locating the exact location of the Korean Church in comparison to the Town Hall on the map.

The teachers accompanied the students around the church as they all sketched and identified the parameters by looking at street signs and adjacent structures to pinpoint the front, back, right or left in reference to where we are in the church. After we returned from outside, the children had to use their visual memory as well to interpret what they saw on the town map. 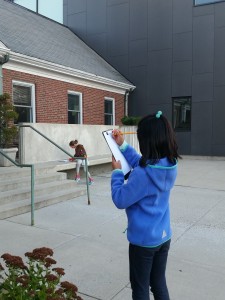 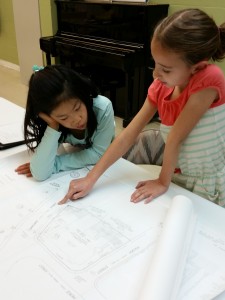 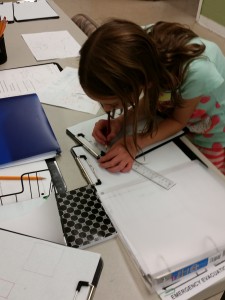 Taking the knowledge of the previous scale of map, we were able to measure the distance between the church and the Town Hall which came to about one hundred feet. What does this mean? Since the children had previously measured the classroom length at forty feet, it helped them put into perspective the twice as long distance to the Town Hall. 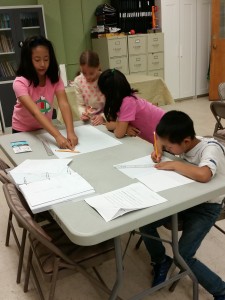 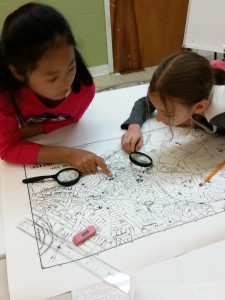 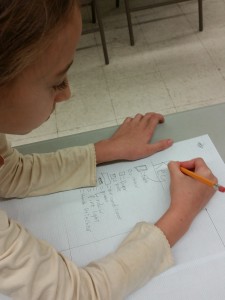 On the first week of November, we conducted a successful evacuation drill thanks to the children putting their knowledge together to figure out our route. Our map exploration isn’t over yet. We still continue to explore cardinal directions and offer fun activities with a compass. We’ll see how the children do!